Over the years, MTP Poznań Expo has been a window to the world, especially the colourful world of the West. It was here in 1957 where Poles had their first opportunity to drink Coca-Cola, in 1929 Poland's first television set was shown and in 1956, thanks to foreign journalists attending the fair, the world learned about the great strike of workers in Poznań and its bloody suppression by the authorities.

Learn interesting facts from our history 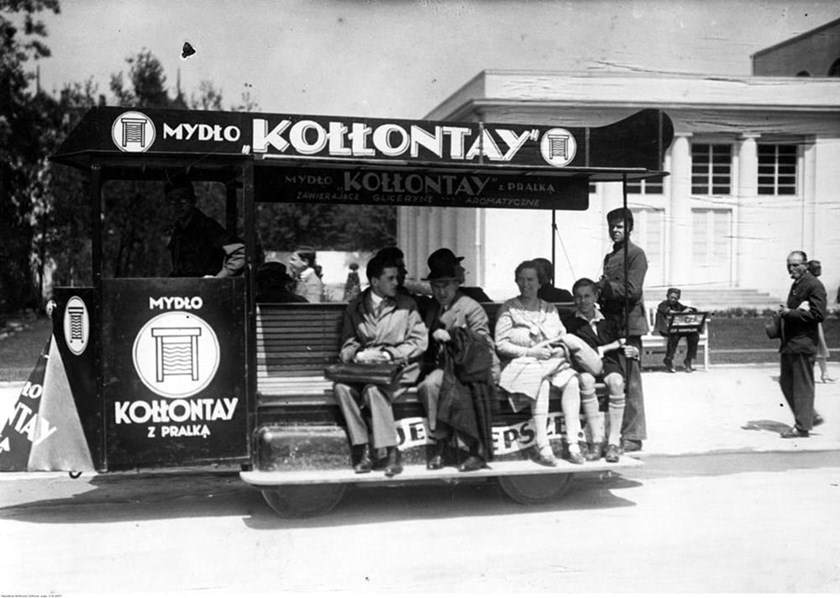 In 1929, on the tenth anniversary of regaining independence by Poland, Poznan hosted the General National Exhibition at the fairgrounds of MTP Poznań Expo. This was the greatest commercial event in the history of our country so far. Enjoying all fair attractions required a few days and strong legs to walk many miles through the fairgrounds. To facilitate visiting, the organisers offered small electric vehicles for transporting the guests.

In order to visit the Poznan Fair, commercial flights were available from Gdansk and Warsaw. The flights were operated by "Aerotarg" Air Transport Association. The first flight to Warsaw was organised on 29 May 1921. It lasted about two hours, and the price of the ticket was considerable high - 6 thousand Polish marks. The airline operated until 16 June 1621. It transported over 100 passengers and approx. 3000 kg of shipments. On this occasion, Polish post issued its first airmail stamps (worth 25 and 100 Polish marks).

The ugliest aircraft in the world 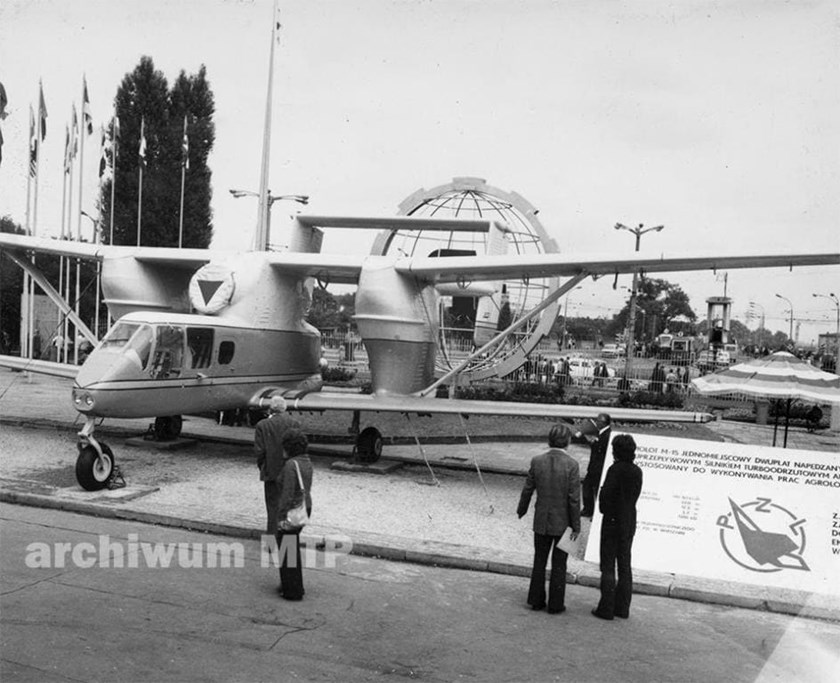 The infamous M-15 Belphegor was a jet aircraft for agriculture. The first and only plane in the world of this type was presented at the spring technical fair in 1975, just before launching its serial production. The plane was produced by the Communication Equipment Factory in Mielec at the request of the authorities of the USSR. Its main purpose was to replace An-2 aircraft and operate large agricultural fields in the USSR. Work on the aircraft started in 1971. The first flight of PZL M15 prototype took place on 9 January 1974.

The machine was displayed in front of the main entrance. It was very noticeable not only because of its location - its design and shape stirred some controversy. 'Przekroj' magazine reported that it was "unlike to any flying objects known to human". According to many visitors, the plane was just ugly. In 1977, the aircraft was displayed at the International Aviation and Space Salon in Paris, where Andrew Ablamowicz - one of the pilots - named it 'Belphegor' referring to the Phantom of the Louvre. This name was quickly adopted. According to many people, no uglier aircraft was produced in the entire world. 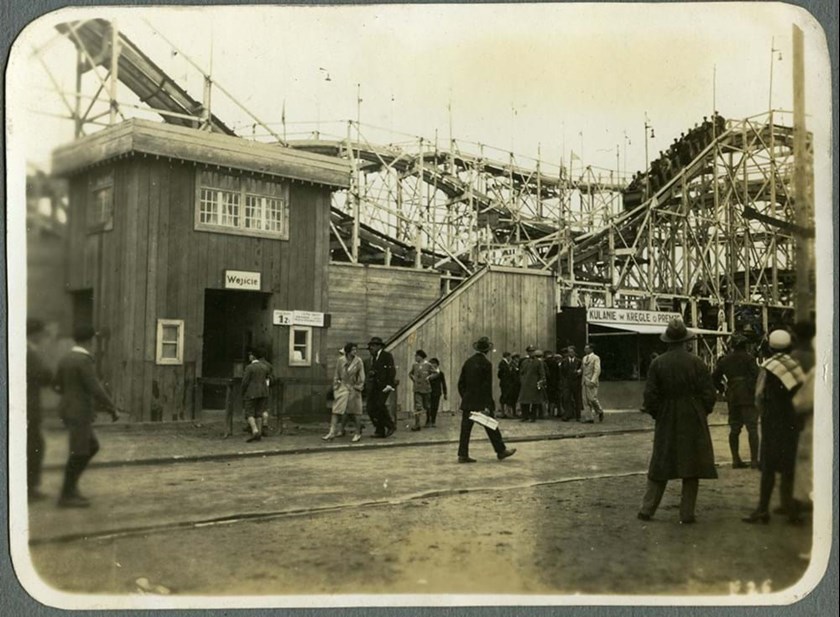 Amusement parks had been known in Poland before, but during the General National Exhibition (PeWuKa), held in 2019 in Poznan, Polish term "amusement park" was used for the first time. The amusement park organised during PeWuKa was the biggest in Poland. Visitors were thrilled by the largest in Europe (92 meters) water slide, two-kilometre roller-coaster, Ferris wheel, a electrodrome with 25 scooters, auto-mobile train with 15 carriages and 20-meter waterfall. 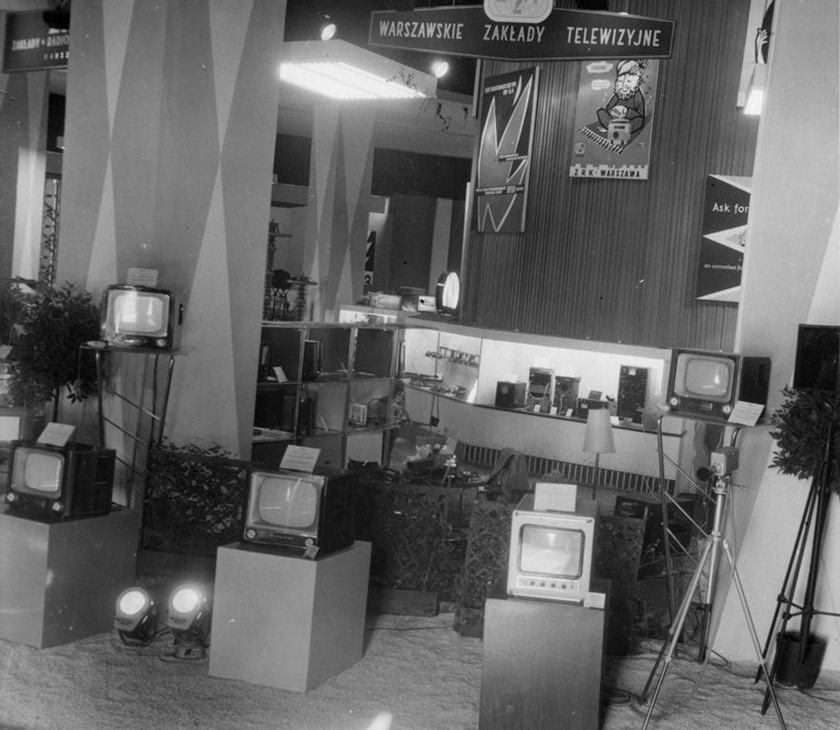 Television was one of the most important inventions of the twentieth century, present at the Poznan Fair almost from its beginning.

The TV set displayed at the fair was purchased by the Radiocommunications Department of the Ministry of Post and Telegraphs. Eight years later, the Experimental Television Station of Polish Radio was established in Warsaw.

In 1956, French exhibitors installed a huge TV antenna on the Spire. They used Radio Industrie equipment to broadcast first experimental TV programs during Poznan Fair. Their television equipment has never returned to France. The authorities of the province bought out the devices and decided to establish a television centre in Poznan, which started its operation in the premises of Belvedere restaurant. On May 1, 1957 the centre broadcasted the first TV signal. The program was enjoyed by a relatively small audience, as only 100 TV sets were registered in the city at that time. 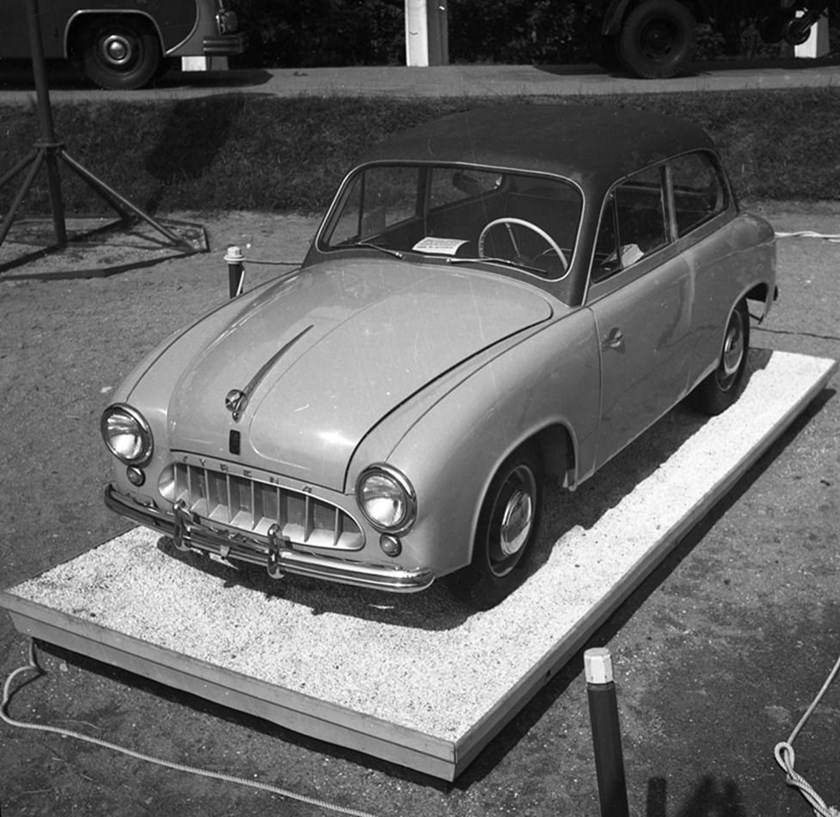 In 1955, the MTP Poznań Expo was the venue for presenting the prototype of Syrena - a new car of Passenger Automobile Factory (FSO) in Warsaw. The mass production of the vehicle was launched two years later. 'Ilustrowany Kurier Polski' magazine informed its readers about new car: "Aesthetically pleasing and harmonious colours - dark green and aquamarine - will satisfy even quite fastidious passengers. The comfort will be ensured by two foldable front seats". The prototype presented at the fair was the deluxe version. The vehicle had a roof structure made of wood and artificial leather. However, the model produced for masses had entirely metal bodywork. 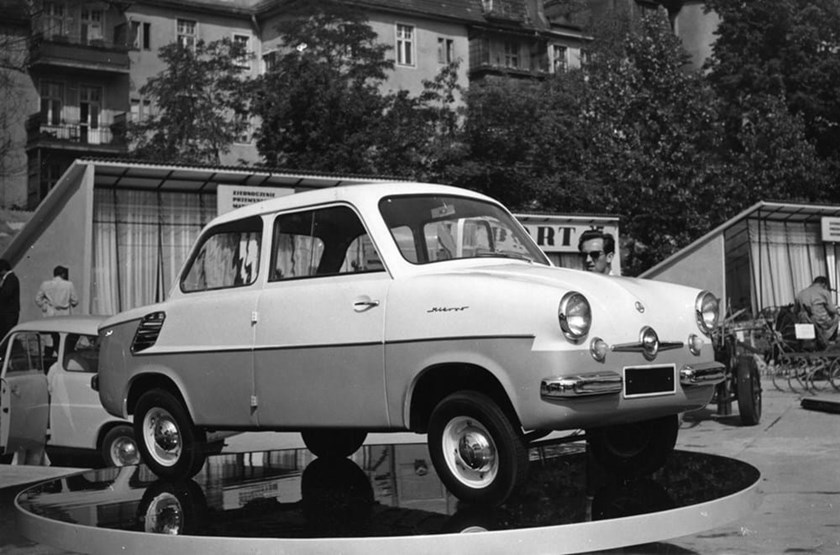 In 1959, exhibitors at Poznan International Fair presented Mikrus. It was a budget car for the masses, inspired by German Goggomobil vehicles. Unfortunately, the mass production of the car has never been launched Only 1,728 vehicles were produced, including two convertibles and the prototype of truck version.

The first sip of Coca-Cola 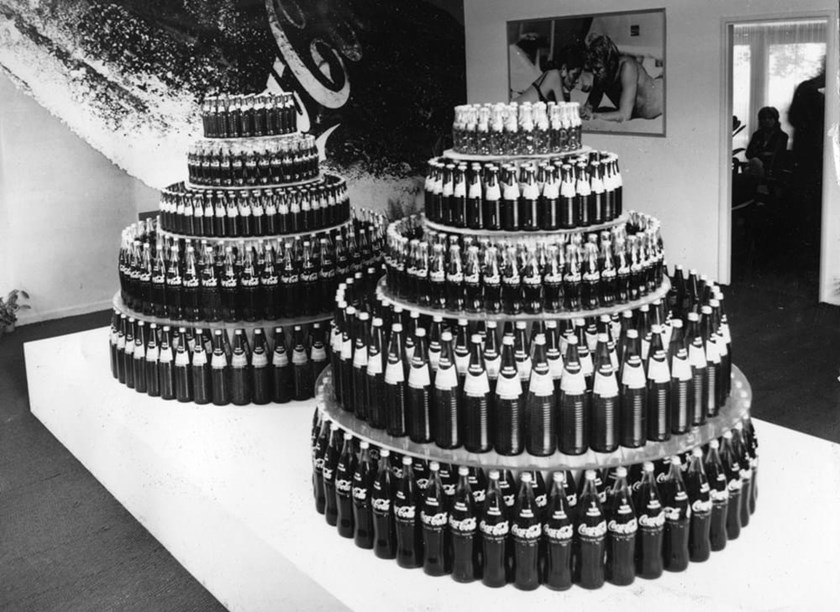 Supposedly, this beverage was offered before the WWII in one of Warsaw's bars. However, the official debut of Coca-Cola took place in 1957 at MTP Poznań Expo. This was the year when Americans returned to the fair and tempted the participants by this forbidden fruit of capitalism, hated by communist propaganda. For many years, Coca-Cola was a hardly accessible product, becoming a symbol of Western freedom.

The stores did not offer this beverage. It was commercially available in the 1960s, but only in stores where customers paid in foreign currency - Pewex and Baltona. In regular stores, Coca-Cola was offered 15 years later - the bottling license for Poland was signed during the reign of communist politician Edward Gierek. Interestingly, Poland was divided into trading zones of Coca-Cola and Pepsi-Cola. The first product was sold in eastern Poland and Silesia, while the other was available in Malopolska and in the western and central parts of the country.

Stone from the Moon 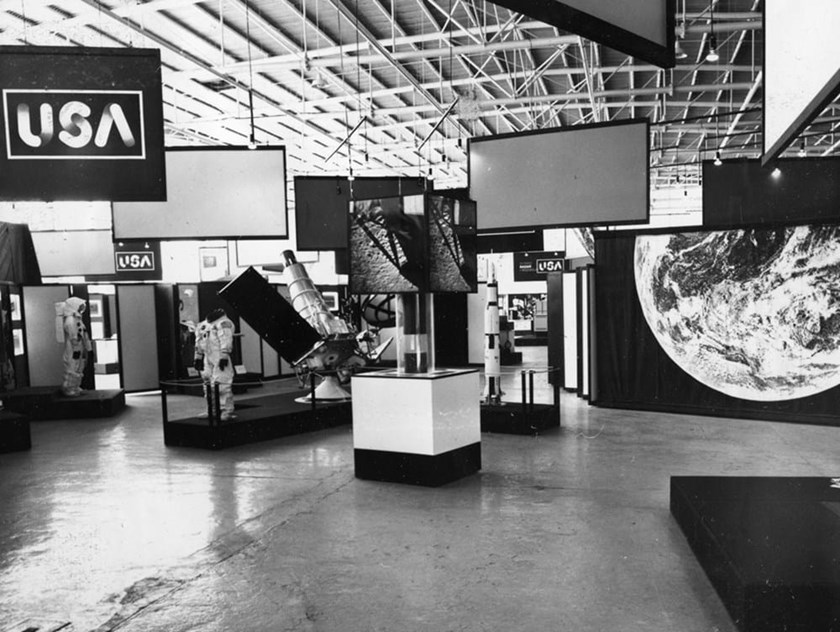 In the years 1957-1975, the United States and the Soviet Union competed in the Space Race The competition between two Cold War adversaries was also present at the MTP Poznań Expo. In 1958, the USSR presented in its pavilion models of Sputnik. In response, the Americans brought their spacecrafts and the greatest attraction: the stone from the Moon (1973). It was a gift of US President Richard Nixon to the Polish nation.

The prototype of personal computer was presented at the fair in 1971. It was designed by Jacek Karpinski and named as K-202. The computer was equipped with 16-bit microprocessor, which provided one million operations per second and it operated using the Karpinski Operating System. The PC was produced until 1973, but the political situation prevented its mass production. 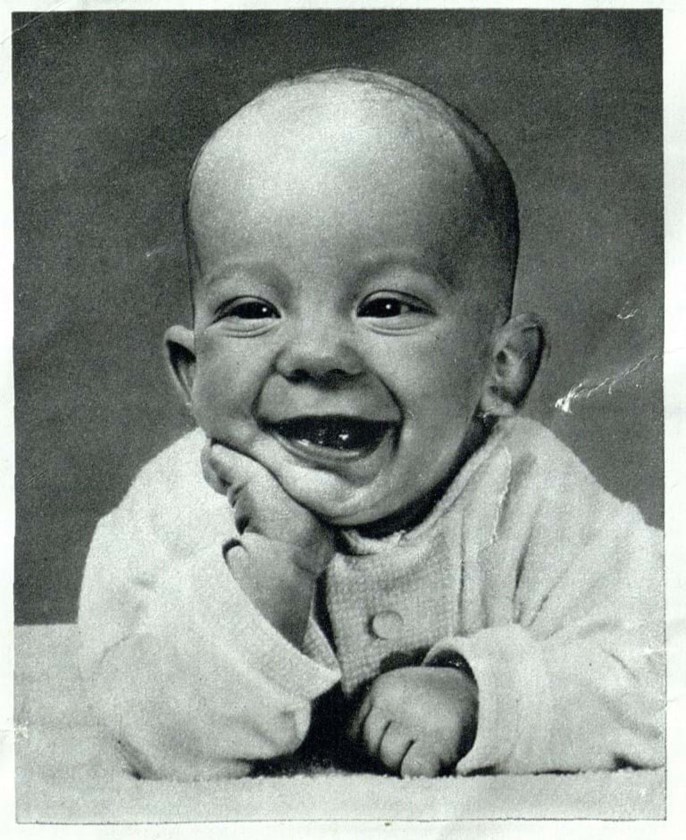 This was the time needed to develop a photo taken in the US pavilion of the fair, in 1963. The instant camera used to take this photo aroused a widespread admiration. A year earlier, a photo studio for children was organised in the US pavilion. Parents participating in the show received free photos of their children from American exhibitors. 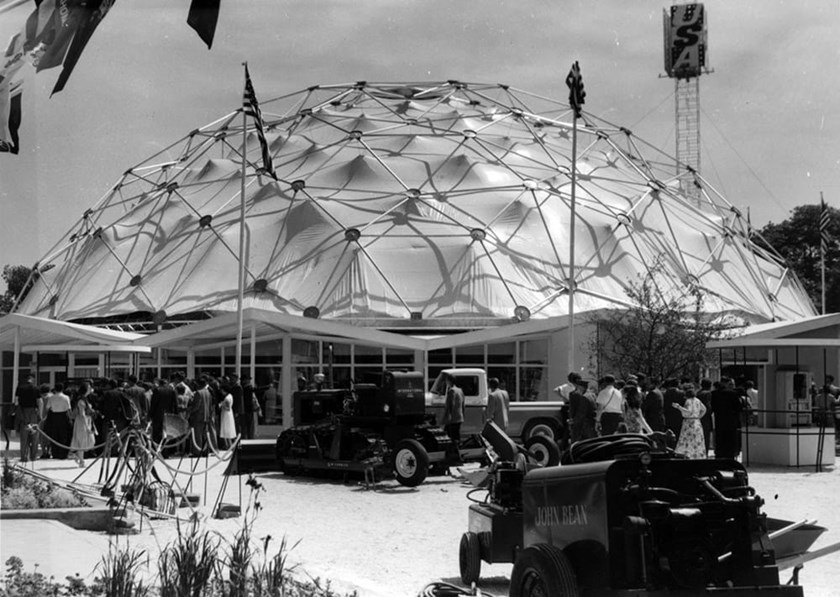 In 1957, the fair hosted the exhibition of Americans for the first time. The USA debuted in grand style by building its own futuristic pavilion, which attracted wide admiration. The pavilion in the form of a dome was designed by well a known architect - Richard Buckminster "Bucky" Fuller. The structure was planned as temporary and ultimately its final destination was Triennale in Milan, a big event dedicated to architecture and design. Pavilion structure was made of steel, spherical trusses with suspended cotton fabric that formed the walls. Equally impressive was the interior. Visitors from the United States presented (among others) equipment of "typical American home": shiny toasters, modern refrigerators and dishwashers. Outside of the hall they presented motorboats and pick-ups. 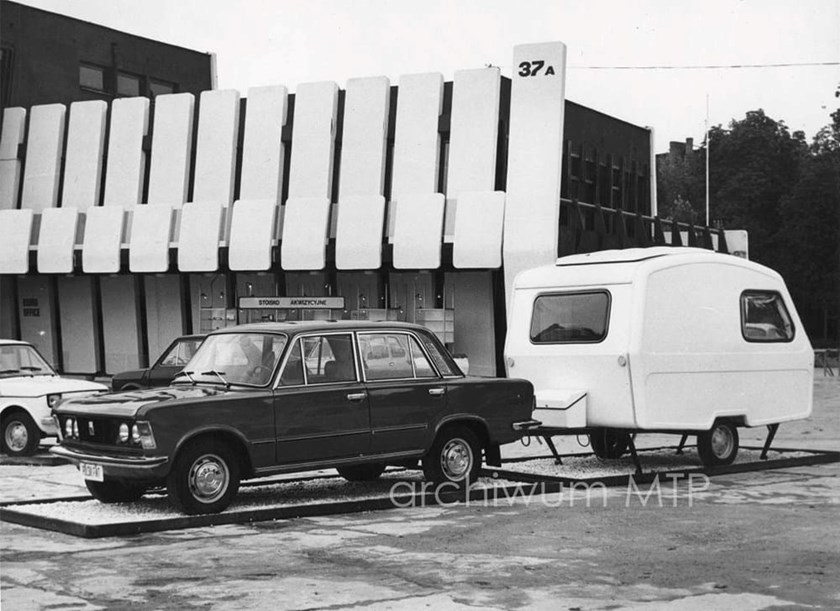 It was a real sensation. In 1966, the Factory of Precision Instruments in Niewiadów, known for its household appliances, Christmas decorations or folding kayaks ('Neptun'), brought to Poznan Fair its new invention - a foldable caravan called 'Tramp'. It was an assembly of parts from different vehicles: the wheels were taken from Mikrus, springs from Syrena car, shock absorbers from Junak motorbike and lights from Warszawa car. The construction was relatively light - it weighed only 180 kg. The trailer was simple in assembling and disassembling. The user needed only 15-20 minutes to prepare an accommodation for a family with two children.

"Tramp" was not a commercial hit in Poland, mainly due to its high price. However, six years later N-126 trailer was presented, which turned out to be a bestseller. This trailer, with the shell made of resin and fibreglass, was light enough to be towed by the smallest car in the market - popular Fiat 126. N-126 quickly gained popularity not only at campsites but also as a mini food truck or a market stall. It was popular not only in Poland - for years it was a Polish export hit. Production of the trailer is continued in Niewiadow nowadays.

In the footsteps of trade fair architecture

We invite you to visit!

1921 – Poznań International Fair (MTP) was established in 1921. It is one of the trade show organizers with the longest history. The 1st Poznań Trade Fair, a domestic trade show, was organized between 28 May and 5 June 1921 at the initiative of Poznań merchants.

1927 – MTP joins UFI, the Global Association of the Exhibition Industry

1929 - General Domestic Exhibition (PWK) – organized at the initiative of Cyryl Ratajski, was an overview of the economic and cultural achievements of Poland. The exhibitions, organized on a space of 650,000 square metres, attracted 4.5 million visitors. 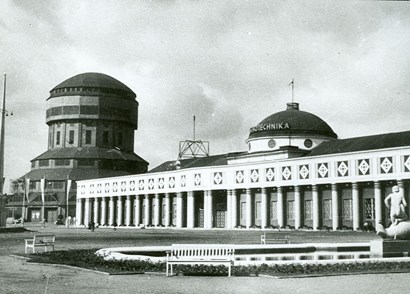 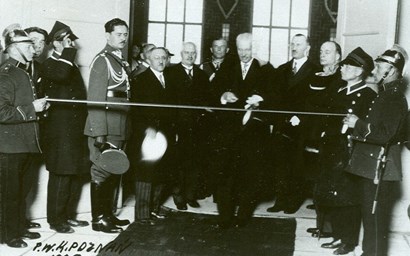 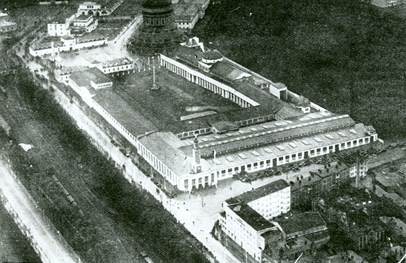 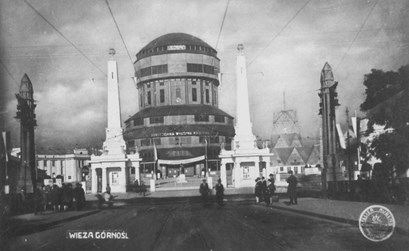 In the 1930s the Poznań International Fair flourished and was ranked the fourth European organizer of international trade shows.

In the 1940s, the trade grounds, which were badly destroyed during the Second World War, were rebuilt. In the following years the Poznań International Fair developed its exhibition programme and gradually added new exhibitions and trade shows to the programme. Old exhibition halls were rebuilt and expanded and many new halls as well as other facilities were built.

1955 – reconstruction of the Upper Silesian Tower, which was given the shape of a spire.

1956 – a general strike against the communist rule in Poznań; the events of 28 June 1956 were witnessed by thousands of trade fair guests from Poland and abroad 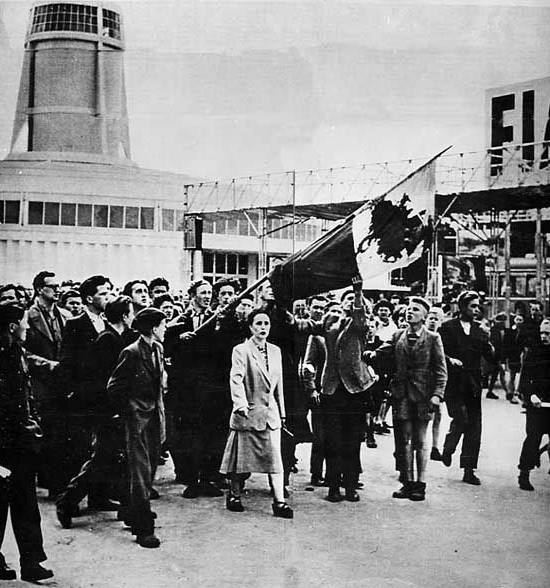 60s – a rapid development of the Poznań International Fair and problems with the traditional exhibition space. Exhibitions are additionally organized around Lake Kierskie, in Edwardowo and in Wilson’s Park.

Every year the Poznań International Fair changes its image, upgrades the old exhibition halls and builds new pavilions and facilities.

2015 - MTP company wholly owned by the City of Poznań. The Agreement amending the ownership structure of MTP was signed on October 5, 2015, at the premises of MTP by Andrzej Czerwiński, Minister of Treasury, and Jacek Jaśkowiak, Mayor of the City of Poznań.